How to bring love into the world

How to bring love into the world

I have no doubt you’ve heard of the influx of violence in our world as of late.

It’s all incredibly heartbreaking, and it begs the question: why is there so much pain, hate, and anger in the world?

I’ve heard everyone from news analysts to morning talk show hosts share their theories: people are discontent with their lot in life, they feel misunderstood and misrepresented, they feel powerless, they’re stressed out and overworked, they want to make a statement, on and on and on.

But to respond by taking a life? It’s just devastating. It hurts. It deeply saddens me. And if you’ve been affected in any way – whether directly or simply because you’re a sensitive soul for whom such news is such a weight on your heart…I want you to know that I’m sending love your way.

I also want you to know that we each have a responsibility to take a stand for love.

I pray for a world where we can all one day live in peace with one another, but until that day comes, we don’t have to let pain, hate, and anger win every day because every day we have a choice.

With every thought, word, and deed – you always have a choice: you can either add love to the world, or subtract love from the world.

That’s why I want to give you a challenge this week. Let’s work together to spread more love in our world in the days ahead.

Love isn’t always a loud roar – sometimes it’s a simple whisper: a smile for a stranger, looking your cashier in the eyes and asking them how their day’s been, paying for the person behind you in the grocery store or drive-thru window, sending a ‘thinking of you’ card to someone you haven’t spoken to in a while, donating your time or money to a special cause

I know these seem like such small things compared to the monstrous acts of violence that have been so rampant in our world lately, but I’m of the mind that even the smallest of gestures can make all the difference for one individual, can change the world for that one person – because you never know what they’re going through. And when we change the world for one person, it starts a ripple effect…and before you know it, love is coming like an avalanche, blanketing the world at large with its warm embrace.

So, will you join me in this challenge? Let’s light up people’s souls this week with joy. Let’s bring a smile to their faces! Let’s warm their hearts. Let’s show them that someone does care.

Let’s prove that, in the end, love always wins.

Side note: If you’re looking for a unique way to help those in need this holiday season, check out www.alexidevilliers.com. Alexi is an artist who, for the past 6 years, has been preparing meals for the homeless and feeding them every Saturday. He recycles the cans from these meals and makes robots out of them, which he then sells to raise money to buy more food for the homeless. Pretty cool, right? 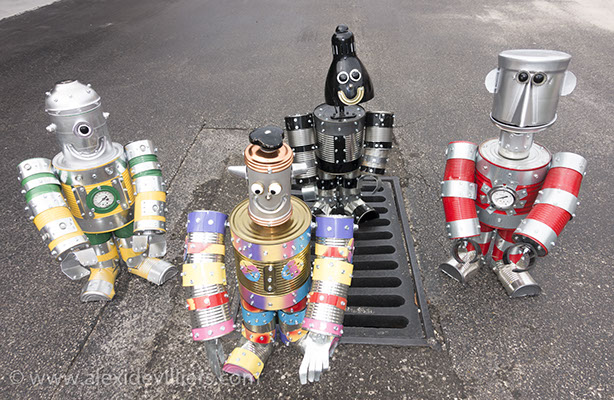